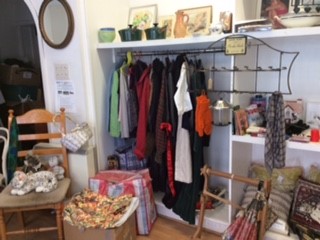 Early in 2020, as part of TASC’s fund raising efforts, we hosted a pop-up shop at i-Chameleon in Halesworth Thoroughfare after previously launching the Crowd Justice appeal on the Internet.

We enjoyed a busy, buzzy week in Halesworth in mid-February, receiving many generous donations from supporters including Halesworth Library, which was holding environmental activities of its own. Sales from the shop raised some £1,200 and was an unqualified success. The cream of the remaining items went to auction, raising a further £290, unsold clothes were donated to the Library for the clothes swap and the last few books were delivered to charity shops.

TASC found that there was noticeably more active support for opposing EDF’s plans this year and huge concern for the future of the AONB, RSPB Minsmere, the entire surrounding area and all of our lives for over a decade to come.

Many thanks to everyone who contributed their time, help and items of stock – there were some absolute gems – and we are all extremely grateful for your support.