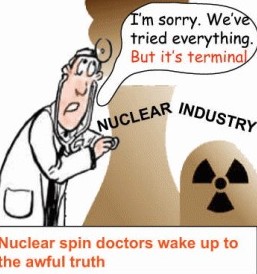 The 21st January EADT Business Supplement included an article from John Dugmore, Suffolk Chamber of Commerce’s chief executive, saying they had written to the seven successful Tory MP’s offering them the Chambers congratulations. This was then followed by asking for the MP’s support for eight items which would favour their members. This support was then further followed by a request to ramp up support for Sizewell (SZC&D) not a single, but two reactors. It was stated that they have a supply chain of over 1000 Suffolk firms and those further afield who are anxious to have a tranche of any future work.

I should like to make it clear to all local hopefuls that EDF have, in the past, made it apparent through none other than their very recently departed SZC&D project Director, Mr Jim Crawford, who said that in order to attempt some essential financial savings that they intend to draw heavily upon their already trained staff who would be transferred from their more advanced current but still unfinished EPR single reactor projects at Olkiluoto in Finland and Flamanville in France, and also from the under-construction double reactor Hinkley Point (HPC&D).

He also said to all those present , including me if I heard him correctly, at a recent Community Forum conducted by EDF, that SZC&D would not happen without British government funding using a Regulated Asset Board (RAB) funding arrangement topped up by an annual charge on our electricity bills. Mr Crawford retired from EDF shortly afterwards. At Sizewell, we now understand EDF would need to increase their workforce from 5600 to 7000 workers! This would in itself more than double the population of Leiston and the locality with all of the inherent consequences which are now being experienced at HPC&D with traffic chaos, drunkeness, drugs, nervous breakdowns, cottages used for prostitution, as was experienced with SZB, but this time on a much larger scale. HPC&D is currently a chronically serious unresolvable problem all of EDF’s own making. Let us not fall into the same trap. TASC (Together Against Sizewell C) has been warning of all of these problems for the last ten years and needs all of the support both they and TEAGS (Theberton and Eastbridge Action Group) can obtain to stop this government sponsored madness.

The Suffolk Chamber of Commerce may keep wishing for SZC&D, but if this wish ever became a reality, they along with EDF would be partly responsible for the total collapse and decimation of the very succesful existing Heritage Coast economy. The full employment, leisure, recreation and tourism industries would, as has been said on many an occasion, be but a memory. It is now clearly accepted that the SZC&D project would have to be solely road led, which would necessitate major road alterations from a massive area to force industrial access into this very precious concealed AONB/SSSI location. It is also now realised the local aggregates for the concrete is of a totally unsuitable type for building nuclear power stations. This aggregate would instead have to transported by road from the Mendips in the west country, close to the HPC&D where the aggregate is of a more suitable type, I understand. Or, alternatively it would need to come from France. That in itself is incomprehensible. How nuclear can claim to produce low carbon electricty never ceases to amaze me.