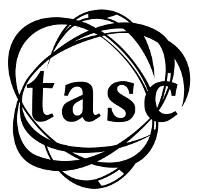 This information is also available as a leaflet.

The effects of exposure to radiation is a complex and much-debated issue.  There is much disagreement about the harmful effects of such exposure but one thing experts agree on is that there is no safe level of radiation.  Radiation is harmful at all levels.

The existing guidelines for ‘safe’ levels of exposure to ionising radiation (a type of energy released by atoms that travels in the form of electromagnetic waves (gamma or X-rays) or particles (neutrons, beta or alpha). The spontaneous disintegration of atoms is called radioactivity, and the excess energy emitted is a form of ionising radiation), as operated by the civil and military nuclear industries and as applied by the regulatory bodies (Office of Nuclear Regulation, the Environment Agency, Scottish Environmental Protection Agency etc) are handed down from the International Commission for Radiological Protection (ICRP) which itself bases it recommendations for exposure levels on data obtained from the survivors of the atom bombs dropped on Hiroshima and Nagasaki in 1945. The data used is almost certainly inaccurate as the information gathered from confused horrified and traumatised survivors was and has proven to be understandably unreliable. The fact remains, however, the so-called ‘safe’ exposure rates over the last 70 years have steadily been revised downwards as we find out more about the harmful effects of radiation exposure. (There are occasional exceptions: after the Fukushima accident in April 2011, the Japanese Government increased the permissible safe level of exposure for school children by 20 fold.1 Ministers defended the increase in the acceptable safety level as a necessary measure to guarantee the education of thousands of children. 2)

As can be seen from the diagram below, although there is clear agreement about the danger of high levels of radiation, experts do not agree on whether very low levels of radiation are beneficial, neutral or how harmful they are. The majority of studies assume a ‘linear no-threshold (LNT)’ approach to exposure and health – the higher the ‘dose’, the greater the health impact. 3 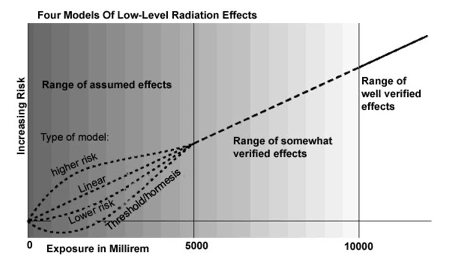 In recent times the way that exposure to radiation is assessed has been criticised. The amount of radiation a person is exposed to has traditionally been calculated by averaging it out over their whole body (Joules per Kilogram mass of tissue 4). However, radiation is often concentrated in high energy hot particles which, if inhaled or ingested and since they emit alpha radiation, have the ability do damage to the surrounding cells.

It is like comparing the amount of heat in a nice hot bath with the heat in a burning cigarette. The hot bath may contain far more heat, but when the heat is concentrated in the end of the cigarette it is far more painful and damaging when applied to the skin.  In the same way, a tiny alpha-emitting radioactive particle, if lodged in the lung, for example, can impart its energy over a long period of time to a very small area of tissue.

The upshot is that “dose” becomes a meaningless measure. Comparisons of external dose received are not comparable to internal dose when considering low dose, short range radiation effects on DNA especially from exposure to high density alpha radiation.

Children are more sensitive to radiation than adults. Generally, when cells, organs or tissues are developing, as they are in children, they are more likely to be affected if radiation interacts with them. Thus, age is another factor which has to be taken into consideration when assessing the effects of low-level radiation.

The giant nuclear plant originally known as Windscale and renamed Sellafield in the early 90s on the Cumbrian coast has been reprocessing used or ‘spent’ nuclear fuel rods from the first-generation Magnox plans since the 50s.  Apart from creating a far greater volumes of low-, intermediate- and high-level waste than the volume of the original fuel, the process requires the discharging to the Irish Sea of 2 million gallons of liquid waste a day.  This waste contains traces of many of the 200 by-products of nuclear fission including long-lives plutonium and americium.  Plutonium is a heavy metal and sinks to the seabed around the outfall pipe, some 2 miles off the Cumbrian coast in about 70 feet of water. But unsurprisingly it doesn’t stay there.  The action of the tides act to drive the waste ashore where it is dried by the sun and re-suspended in the atmosphere by even light winds. It is thereby made more available for ingestion or inhalation.

In 1983, Yorkshire TV produced a film called ‘Windscale – the Nuclear Laundry’ which identified a ten-fold increase in childhood leukaemia in the village of Seascale, only a few miles from the plant.  Exposure to radiation is a known cause of the disease.  The nuclear industry flatly refused to give any credence to the argument that the disease was caused by anything other than the possible mixing of populations and the resulting mobilisation of viruses. Environmentalists were fined £50,000 for attempting to block the discharge pipe in the Irish Sea.

In 2002 the German government sanctioned the compiling of a report looking at the level of leukaemia in the under-fives within a 5-kilometre radius of all German nuclear power plants. This study, known as the KiKK report (Kinderkrebs in der Umgebung von Kernkraftwerken), was published in 2007. It identified a two-fold increase in the number of leukaemia cases.8  Similar studies carried out in France and Switzerland echoed these findings.9 In the UK, the Health Protection Agency’s sub-committee, the Committee on Medical Effects of Radiation in the Environment (CoMARE) published its 14th report looking into these worrying findings abroad. Although COMARE also found an increase in childhood leukaemias, it argued they were not statistically significant, a claim hotly contested by COMARE’s critics.10

A 2007 study of Swedish children exposed to fallout from Chernobyl while they were foetuses between 8 and 25 weeks gestation has found that the reduction in IQ at very low doses was greater than expected, given a simple Linear No threshold model for radiation damage.5 Similarly, Dr Alice Stewart showed that foetal damage could be caused by x-rays of pregnant women, a finding which led to the curtailing of the routine use of x rays during pregnancy and early childhood.6

Nuclear Power stations are allowed to emit a certain level of radioactive material into the atmosphere. An average of the amount emitted is calculated over the whole year, however, in reality, most emissions from nuclear reactors are not spread evenly across the whole year but happen during short refuelling episodes which occur about once a year and which last a few days or so. In September 2011, Germany released data tracking half-hourly releases of radioactive gases from a power station (Gundremmingen Nuclear plant in Southern Germany) for the very first time anywhere in the world. This is shown in the chart below for 7 days in September 2011. The chart shows that the normal emission concentration during the rest of the year was about 3 kBq/m³, but during refuelling on September 22 this sharply increased to ~700 kBq/m³. In other words, a spike. It shows that nuclear power stations can emit much larger amounts of radioactive gas during refuelling than during normal power operation. In order to refuel, reactor pressure vessels must be opened up: this releases large volumes of radioactive gases and vapours to the local environment.11

Estimates suggest that people living near the Gundremmingen plant will be exposed to doses of radiation up to 500 times higher during the emissions spikes than they are during the rest of the year. The spikes of UK reactors may not be as high as in Germany because the German power stations are inland and cannot release emissions into the sea, but even if UK spikes were only a fraction as high, they could still be a risk to health. German physician Reinhold Thiel warns of the probable health impacts of large emission spikes: “Especially at risk are unborn children. When reactors are open and releasing gases, pregnant women can incorporate much higher concentrations of radionuclides than at other times, mainly via respiration.” 12

It has long been suspected that children conceived after parental exposure to radiation carry an increased risk of genetic defects. A study published in 2001 on the clean-up workers of Chernobyl showed a surprisingly large number of genetic aberrations in the children of these people, even in cases when the exposure levels to the radiation had been considered low.13 The study concluded that, “The very fact that much lower doses of radiation than previously generally believed can double the number of genomic changes needs serious attention.”

The evidence that exposure to ionising radiation is more dangerous than was first thought increases every year.  There are now at least 60 studies which cause us to doubt the LNT theory and the conventional belief that there is a linear relationship between ‘dose’ of radiation and the ‘risk’ is carries is now thoroughly discredited.  The most telling indicator of this is that in many instances, particularly after the Chernobyl disaster, the real-world effects on health in an affected population are invariably far greater than those predicted by the application of the LNT principle.

Nuclear disasters, accidents, nuclear weapons testing and routine nuclear facility operations around the world all contribute to the release into the atmosphere of alpha-emitting particles, some – most – so small that they are undetectable by the machines used to remove them.  We have no idea how much uranium is swirling around in the atmosphere or lying undetected on beaches or in the ground around our nuclear facilities.  And we have even less idea what the uranium has the capability to do to the health of the populations who are required to inhale it.

In 2020, a preliminary report which sets out the evidence to support the fact that we have to rethink the dose/risk relationship was published.  It was commissioned from the Low-Level Radiation Campaign by the charity Children with Cancer UK.  It can be found at this website: http://www.llrc.org/children.htm.